I love traveling, and I love flying.

The flight from Wichita to Atlanta was cool. When we took off, we curved around from north-northwest to east-southeast, and in the process we flew directly over our apartment, and I saw my car. I knew it was mine from where it was parked and the black-white-black of the hood, top, and trunk.

My flight was at 4:30 and we were eastbound, so we quickly lost the sun. It was my first time flying at night, and it was utterly amazing. Beautiful. I'm sure people who travel all the time are used to it, but I loved having a window seat and I just stared out at the beautiful lights the whole time. Just gorgeous.

At one point we passed over a decently large town compared to any of the other communities we'd flown over, and it had a distinct shape. When I got to the hotel, I looked it up and it was MEMPHIS. It looks a lot smaller from 35,000 feet.

As we descended into Atlanta and the lights got closer, I started to be able to differentiate between buildings and streets. Large buildings surrounded by lights looked like big microchips on a circuit board. Street lights in neighborhoods passed behind what must have been bare tree branches, and so they twinkled on and off like christmas lights. I absolutely loved it.

On our approach, we actually passed right by the airport so we could do a u-turn and come back to land into the wind. As we passed, I started noticing lights that were moving differently relative to the rest, and I realized they were other aircraft on approach. There were two, staggered, but pretty close to each other in air traffic terms. Then I saw two more behind them, and then two more. Hartsfield-Jackson International Airport is the busiest airport in the world in terms of the number of people who pass through it daily, and you can definitely see that reflected in the number of flights landing and taking off. It was about 7:30 PM local time and there were at least SIX planes on approach. I kept seeing more and more and was amazed at how close they were.

Then when it was our turn to land, I was fascinated at how we landed, sort of braked and slowed down some, and then immediately veered off the runway before really braking and slowing down. It was like "land and then get the hell out of the way".

Of course, it was a bonus that they had XM radio on the flight, and I just happened to have my headphones within reach on my carry-on. The down-side was that the only camera I had within reach was the one in my phone, and trying to take pictures of the lights was just worthless.

On the way back, I had another night flight so I made sure to have the Canon. My window was scratched so it looked like it was dirty and smudged, but I did my best anyway. 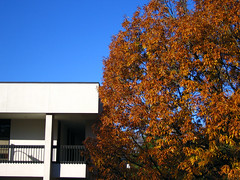 The company where I received my training (called Echo Eleven) had a suite in this complex of buildings. This was the view out the window where I sat.