For some reason I've really got the car bug lately. Probably because mine's been out of commission for two weeks during all this gorgeous weather.

Here are two cars that, while much more pedestrian than the stuff I normally post, are still out of my meager price range. I'd love to have these two instead of the two we have now.

For some reason I've really been noticing these cars on the street lately. I just like the styling, I guess. The MazdaSpeed version uses a 2.3L turbocharged engine to make 274 hp at the crank, and pushes that power through the 6-speed manual to all four wheels through an active torque splitter. All that and four doors? Nice family car there. Built up with the satnav, Sirius and other options, it's around $32,000.

But here's the one I really think is hot. Can you believe it's a Saturn? 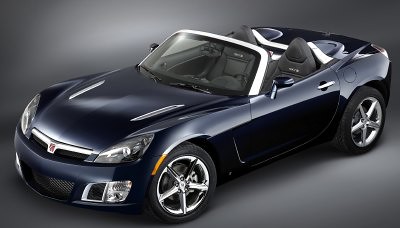 The Saturn Sky has the same body as the Opel Speedster, though GM have decided the engine should be in front, instead of in its rightful place behind the driver. I'll still take two. The Redline edition features a turbocharged 2.0L direct-injection Ecotec engine that makes 260 hp for that little bitty car and makes sure the power gets to the ground through an LSD that's stock on the Redline. The chrome accents are hot too. Underneath the skin this is the same car as the Pontiac Solstice GXP, but I like this one because it's much prettier. (Back to that European Opel designing) This car isn't out yet, but it will probably be another ~$30k ride.
Collapse